DARTMOOR BREWERY ALONG WITH THE MANOR INN...

Posted by Dartmoor Brewery in Oct 2013 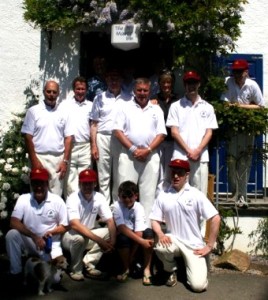 Pictured sporting the new shirts before the match were Nick Allen, Howard Bassett, Bob Cope, Dave Dunn, Pete Foxworthy, Pete Hearnden, Brett Humphries, Russ Liley, Trevor Mann, Richard Mason, Barry Rowland and our mascot, "Rusty" and hiding in the second row was Tina Ryder from Dartmoor Brewery and in the shadows Mick Hartley from the Manor Inn Bob Cope's report on the match: The match that afternoon was a great advert for Village cricket - it was played in the right spirit, friendly and competitive and with a fair result at the end. After over 5 hours of play, the match ended in a draw!! To non-cricketers, not having a winner after such a long contest must sound crazy, but it was an exciting match enjoyed by both sides. Our shirts were very much admired by the opposition, who were the Exeter University side, known as the Erratics. They batted first and scored 167 for 8 from 45 overs. In reply, we were 152 for 9 from 38 overs. At the start of the last over, we needed 16 to win, but their bowler managed a rare feat in getting a hat-trick with his first 3 balls and we were left to see out the last 3 balls to secure the draw.