DARTMOOR BREWERY AND CAMRA HELP DAWLISH GET BACK ON TRACK.

Posted by Dartmoor Brewery in Sep 2014

On 6th September, Exeter and East Devon CAMRA, supported by members from the whole south-west region will be raising a pint to celebrate the re-opening of the Dawlish line. During the closure, local pubs and south-west brewers, suffered significant disruption to their business. A photo shoot will take place at 11.15am at Dawlish railway station in partnership with First Great Western, after which CAMRA members will campaign for the support of real 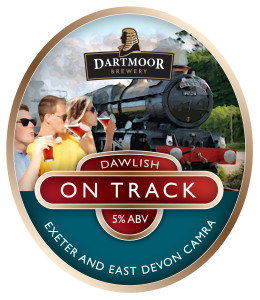 ale and local pubs in Dawlish and Dawlish Warren. Gareth MacDonald, Regional Director for the South West said, “We are particularly delighted that Dartmoor Brewery has agreed to dedicate a special brew in honour of this event. This beer, called 'Dawlish – on track' (pumpclip attached) will be available for sale in a few local pubs although we have hopes that it will travel further afield over the coming weeks. I am very grateful to Dartmoor Brewery for their hard work and support of this excellent cause and look forward to trying my first pint on the day in Dawlish”. Commenting on the special brew, Mike Lunney, Head Brewer at Dartmoor Brewery said: “Dawlish - On Track is a delightful deep bodied golden beer inspired by the golden age of steam and beautiful sands of the Dawlish Coast. At 5% ABV, it has a well rounded rich flavour with a slightly sweet and spicy after taste, finishing with a subtle hop aroma to keep you right “on track”. The day will celebrate local pubs and highlight their role in supporting local communities. We very much hope that others will also join us. We are delighted that the local Mayor has agreed to attend the photo shoot.