Posted by Dartmoor Brewery in Sep 2014 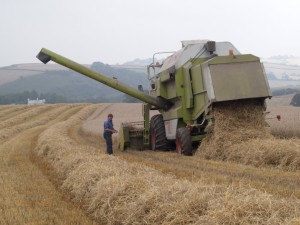 The good summer we've had this year and the dry weather at harvest time has helped Dartmoor farmer Tim Cox to reach his cropping target of 250 tonnes of Dartmoor barley grown exclusively for us. We began our partnership with cereal farmer Tim Cox three years ago when he agreed to grow malting barley for us, the first grown in the Dartmoor National Park.  We'd been looking to source malted barley locally to use in our Dartmoor branded beer for some time, with a view to creating beers that had a true taste of Dartmoor. The quality of malting barley is so important in making the best tasting beer and we wanted our malt to be as local as we could get, and were really delighted when Tim agreed to grow for us. This was a new venture for Tim who had never grown malting barley before. It is a demanding crop with skill needed to get the correct level of nitrogen demanded by brewers.  We are proud to brew on Dartmoor and being able to source barley from within the Dartmoor National Park gives our beer more provenance and makes us carbon friendly too. Tim's land at Drewsteignton is a mix of Devon clays and grit, is in the rain shadow area of Dartmoor, but its height at 600m makes growing such good quality barley a real achievement.  It is one of the few areas on Dartmoor capable of growing grain to a high enough standard for brewers. Our barley from Tim travels less than 45 miles from Tim's fields to Tucker's Maltings in Newton Abbot and then to our Brewery, and means we're able to reduce our beer miles and support another Dartmoor business. Tim has increased the amount of barley grown for us each year and this year's harvest should provide the Brewery with 80% of what we'll need for next year's beers.  And it only gets bigger and better….as Tim is already planning to plant more barley in Spring 2015 which will produce all of the 300 tonnes of barley we need so that all of Dartmoor Breweries beer in 2016 will be made from barley grown in Dartmoor National Park.  We think that's something really worth celebrating!