Dartmoor Best and many Guests

Posted by Dartmoor Brewery in Mar 2015 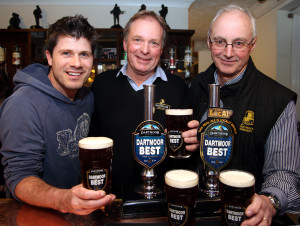 We had the official launch of Dartmoor Best on the 26th February .This was at the Plume of Feathers in Princetown, the pub where the brand name was first used in 1984. After a trade deal with St. Austell brewery last year the brand name was transferred to DartmoorBrewery and used to make our fourth and probably the last of our core brands. This was a new and totally different beer to the one it has previously traded under. It was a chance for us to try something completely different to our other beers and where we could indulge our love of leaf hops. This was new variety of hop to our core range and obviously something we are keeping a bit of a secret. Although we have been supplying the new beer for the last few weeks we wanted to have an official launch and hopefully all the good publicity that goes with it. The intention was to have an invitation only evening for about 100 guests, but in the event word had got out and we ended up with probably twice that number. We hope it was to try our new beer, but our guest and supporter Seth Lakeman may have had something to do with the increased numbers. Seth had agreed to do the launch and then play to finish the evening.  So far so good, but the higher numbers of guests meant the Dartmoor Best casks all ran dry by 8.30. The food came out at about this time and was literally demolished in 15 minutes. All was not lost of course as we just started on our other beers and finished the evening with Dragon and Jail. Seth and his father did play and had two friends come along, Dan and Malcolm, fiddle and mandolin, both very accomplished musicians. Seth's dad played squeeze box and spoons. Now spoons look easy and something we might all aspire to, but try getting a sound out that is musical rather than just rattling metal. His dad can also sing well, so we hope that at least one of Seth's twins will have some of this Lakeman musical talent passed to them.  These are serious musicians who love to play and enjoy the session. While the rest of us faded somewhat they just played and played, on to 12.30, enjoying their music and free beer.  We are so grateful to Seth and his support in making this a very special evening, and to all of our guests, invited or otherwise. So, while it lasted, how did the new beer go down?  Some very positive comments, one Landlord said he would throw out such and such beer from his bar and put on Dartmoor Best, we of course thought the beer wonderful, but the real test is just how it sells, will it get a following with people actively looking for it and then staying with the brand? Well we hope, watch this space.