Posted by Dartmoor Brewery in Apr 2015 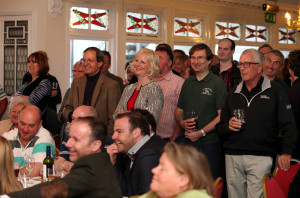 On Thursday night, we celebrated our 21st anniversary with the launch of the hotly anticipated, limited edition Jail Commemorative Ale at a special birthday event at the Two Bridges Hotel. Friends from across the region gathered for the jollifications and were the first to sample the new Jail Commemorative Ale as they enjoyed a celebratory evening of speeches, good food and even better beer! Our Head Brewer, Mike Lunney, was thrilled to be celebrating our 21 year milestone by launching our anniversary beer, commenting: “Jail Ale is the Brewery's original beer, it's brewed within site of the iconic Dartmoor Prison which inspired its name - and it seemed only fitting we should mark our 21st anniversary with an extra special version of our popular Jail Ale” The Two Bridges Hotel did a great job of hosting the event and we were pleased to see so many familiar faces. We'd like to thank everyone for coming and for your ongoing support over the years.