Rumble in the jungle

Posted by Dartmoor Brewery in Jun 2015 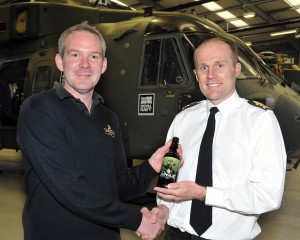 Matt Smith from Dartmoor Brewery presenting the first bottle of Junglie to Lieutenant Commander Ben McGreal[/caption] 846 Naval Air Squadron (NAS), nicknamed the Junglies, has returned home to its Royal Navy Air Station in Yeovilton. To commemorate its homecoming, the Squadron who spent much of their training on Dartmoor, approached us to create a special edition beer for them. We were very happy to follow those orders... and have created over 220 cases of a special edition beer named 'Junglie' that will take centre stage at the Squadron's social functions. Junglie is sure to go down a well- deserved treat with the Squadron, as a highly drinkable golden beer with a unique blend of English Hops, including Cascade, creating a spicy apple fruit flavour with a crisp aftertaste. The Junglies have seen service in almost every combat operation over the past 30 years, and have honed their skills and prepared for conflicts around the world by operating helicopters on and around the tors of Dartmoor. Head Brewer, Mike Lunney commented: “We're so pleased to be playing a part in welcoming the Junglies back to the West Country, and what better way to celebrate than with a bottle of limited edition Junglie ale! They provide a great service to our country and we continue to support them. We're always keen to support our armed forces and their families and we've also donated a few cases of Junglie to the Holidays4Heroes community support group to auction off.”

Good evening, As an original recipient of this fine product, I have an impending special Junglie reunion that would be befitting to have a few crates of Junglie beer ! Would it be possible to respectfully request whether this fine product could be made available ? Kind regards Alan Wilson.