Posted by Dartmoor Brewery in Oct 2016 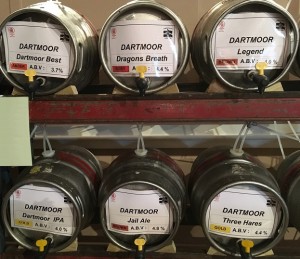 Definitely one of the biggest and best events on the South West ale calendar, the Falmouth Beer Festival 2016 - courtesy of Cornwall CAMRA - was a jolly good few days out for all concerned - including the team from Dartmoor Brewery. The annual Falmouth Beer Festival takes place at the 1910-built Princess Pavilion, which is a year-round music, theatre and festival venue just a stone's throw from Falmouth's sandy beaches and splendid town centre. The Falmouth festival showcased a line-up of more than 240 real ales from breweries throughout the country.  Dartmoor Brewery's offering to the fine folk of Cornwall included the flagship Jail Ale plus Dartmoor Best, Dartmoor IPA and Legend, plus guest appearances from Dragon's Breath and Three Hares. Cornwall's ale lovers definitely took Jail Ale to their hearts, awarding it second place in the strong beer category (in fact, second only to the beer voted overall best in the festival line-up). The distinctly moreish Three Hares also proved a popular tipple for the thirsty Cornish, and was the first cask to be emptied in the whole festival! Look out for the Falmouth Beer Festival 2017.  We'll see you there!