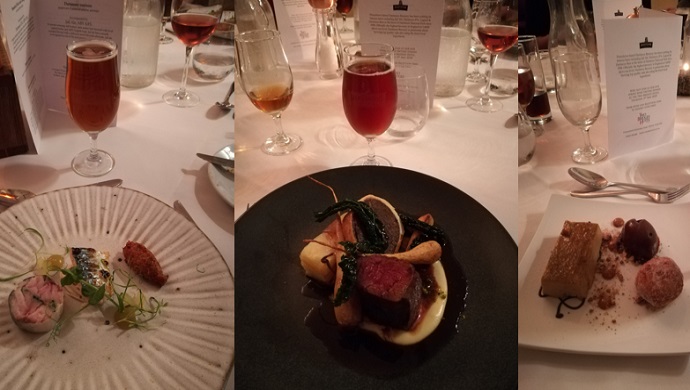 Our guest contributor Darren Norbury brings us his thoughts on our recent Dartmoor Ale Tasting Dinner at the Two Bridges Hotel, where superb Dartmoor Brewery Ales were paired with award-winning food.  Darren is a member of the British Guild of Beer Writers, and editor of beertoday.co.uk.

Conventional wisdom says that when enjoying fine dining, wine is your accompaniment of choice. Well, this is the world of beer and conventional wisdom is a diminishing commodity as the craft brewing revolution presses on. So, to some degree, Dartmoor Brewery has been ahead of the curve, having already organised two annual Ale Tasting Dinners. I very much enjoyed my experience at the third. 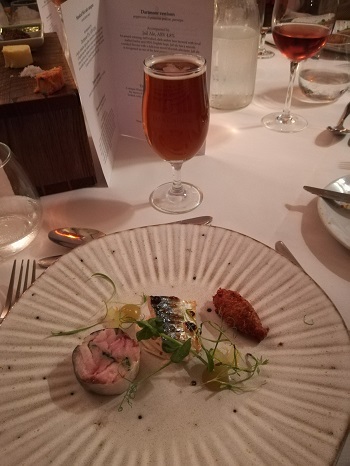 Our hosts for the evening at the beautiful Two Bridges Hotel, in the heart of Dartmoor, were Dartmoor Brewery head brewer, Ian Cobham, and head of South West sales, Kelly Bullard. They took us through the history of the brewery, what’s brewing at the moment, and the company’s ambitious growth plans.

Ian – a former wine grower in France who was brought up in Canada – had brewing experience at both Sharp’s and Harbour before taking on the top job at Dartmoor and has a passion for brewing. He explained that Jail Ale is the best seller, followed by Legend and IPA, although seasonal winter warmer Dragon’s Breath takes that third spot in the winter.

He was particularly pleased to announce that on that day installation of a new 100-litre brewkit had been completed, meaning that experimental short-run beers were now an option. He’s clearly looking forward to this!

To the food, then, served in the Two Bridges’ atmospheric dining room. The first thing to note is that all four courses were, in their own right, superb. The quality of cooking was exceptional and the attention to detail – down to fine home-cooked rolls and speciality butters and accompaniments – was striking. 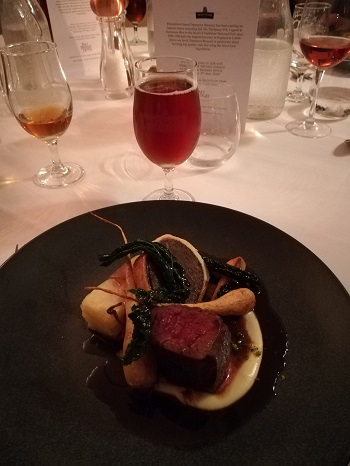 But this was a beer and food matching demonstration and the menu really did show off how beer is now a great option at the table. The beers were served in half-pint stemmed glasses, which is important. Pints are for the bar, stems are for the dinner table. Given half a chance, actually, I’d spend my entire drinking time with stemmed half-pint glasses. So civilised.

When matching beer and food, one basic rule applies. The flavours of each should either be complimentary or contrasting. In each of these cases, they were superb complimentary flavours. The bitterness of the Legend accentuated the flavours of the fish, the richness of the Jail Ale malt and its slight fruitiness reflected the richness of the venison and the earthiness of the accompanying parsnips, while the addition of treacle, liquorice and caramel to the Dragon’s Breath recipe really boosted the depth of the chocolate, coffee and caramel elements of the dessert. With food pairing it’s all about subtlety and in all cases the food wasn’t overwhelmed by the beer. 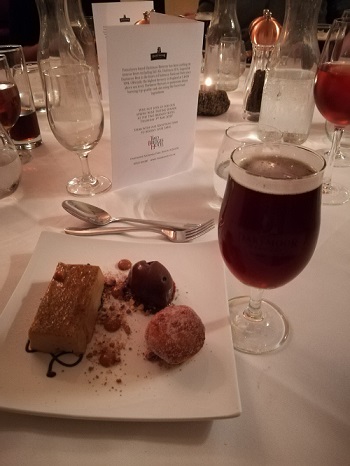 A mark of the success of the event was also how the conversation flowed. Such a good cross section of guests, from pub managers to diversifying farmers, and a couple celebrating their first wedding anniversary.

The only beer that wasn’t matched with a course was the Dartmoor IPA, but we had had that with some canapés during the introductions, and I was happy to quaff another at the bar, with its impressive stone fireplace, afterwards. (Australian hops are the only foreign ingredients in any of the Dartmoor beers, with malt sourced locally, too, and they do add a nice bitter finish to the IPA.)

If you’re eating out, or even staying in, try a beer with your meal. As I said, try to complement flavours or contrast them. Experiment and see what combinations work for you – everybody’s tastes are different. You don’t always have to make time for wine…