Posted by Dartmoor Brewery in May 2010

The challenging and character building event that is The Dartmoor Ten Tors was 50 this year and we, at Dartmoor Brewery, were excited at being invited to support the event. Tina, our Regional Sales Manager has been involved with the event for over five years and after speaking with Alan Stephens, Chairman of Gloucester CAMRA and archivist of the event, he concluded: "some kind of ale may be appropriate and would go down well!" Tina then met with Lt Col Tony Clark. We had just launched our new real ale "LEGEND" and he felt that, as this event was legendary on Dartmoor, itself home to more than its own fair share of legends, the name of this beer would fit the occasion perfectly. Tony also thought that as HRH The Duke of Edinburgh was attending the event this year; and as it was the event's 50th Anniversary; a keepsake of the event would be a good Idea. We could not resist this opportunity and produced a limited edition run of 45 numbered bottles of the Legend Ale. These 45 bottles will be the only run of Legend that will be bottle conditioned, have the Ten Tors banner on the label and have gold bottle tops. They immediately became a collector's item, with bottles reaching Ł10.00 each at auction and proceeds going to HELP THE HEROES. We understand that HRH had the first bottle in a legend glass with his lunch on Sunday. Some were then given to VIP's and 24 were auctioned in the Junior Ranks Club on Saturday night; raising an additional Ł200 for this worthy cause. The beer went down exceedingly well and more casks had to be rushed from the Brewery on Saturday morning to keep up with the demand anticipated on Saturday night! Dartmoor Brewery were very pleased to be involved with the event and hope that this relationship will continue for many years to come. 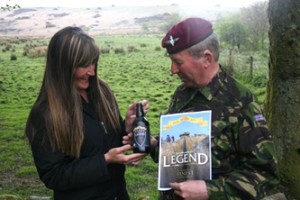