Posted by Dartmoor Brewery in Aug 2016

Recently we were approached by Captain Dan Withers from 3 Commando Brigade about producing a special edition ale to celebrate the life, and heroics, of Lt Col Jack Churchill, or 'Mad Jack' as he is more commonly known. After spending many hours being taught the history of Mad Jack by Captain Withers we were enthralled, and threw ourselves into creating this commemorative ale. We invited the Commandos over to the brewery where they tasted a few different recipes, and selected the perfect one which was destined to become Mad Jack. We then teamed up with James Housego of Jam Design, who knocked together a cracking bottle design, utilising an infamous picture of the legendary, and eccentric, Mad Jack Churchill. Mad Jack (1906 – 1996) was a legend throughout the military, and is remembered for his distinguished career and eccentric nature. He fought through the Second World War, and entered each conflict armed with a longbow, bagpipes and a basket-hilted Scottish broadsword, which he would brandish at the enemy. During an operation in Norway in 1941 it was recorded that as the ramps fell on the first landing craft, Churchill leapt forward from his position playing “March of the Cameron Men” on his bagpipes, before throwing a grenade and running into battle. Lt Col Churchill also holds the accolade of being the only soldier to kill an enemy using a bow and arrow during the Second World War, after he killed a German sergeant with a barbed arrow. Mad Jack became infamous due to his eccentric nature and incredible service record, and is remembered affectionately in the military to this day. So when Captain Withers contacted us and asked us to create a beer in memory of Lt Col Churchill we were delighted, and the Mad Jack ale was born. The ale, a light, hoppy beer with crisp fruity after tones, was launched at the Commando Forces Officers Mess Summer Ball in Stonehouse Barracks in Plymouth, Devon, on Saturday July 16, by Lieutenant Colonel Nik Cavill MBE RM and our very own Scott Prideaux. The new beer was a success on the night, with the commandos drinking every pint of Mad Jack available. Captain Dan Withers said: “Dartmoor is a place of special significance to all commandos who have trained there, the Dartmoor Brewery has recognised this with the production of Mad Jack which has given the Commando Forces Officers Mess a unique way of commemorating some key milestones in its history as well as supporting an exciting local business". Now Mad Jack will be produced in bottles, with 5p from each bottle going to The Commandos Benevolent Fund, a charity with provides financial assistance to former Army Commandos and their dependants, in memory of Lt Col 'Mad' Jack Churchill. Anyone who may wish to purchase some Mad Jack can do so by contacting the brewery on 01822 890789. Huge thanks to photographer Sean Clee for allowing us to use his images! 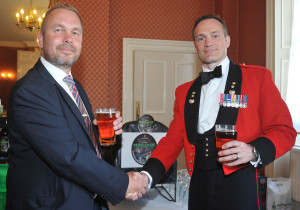